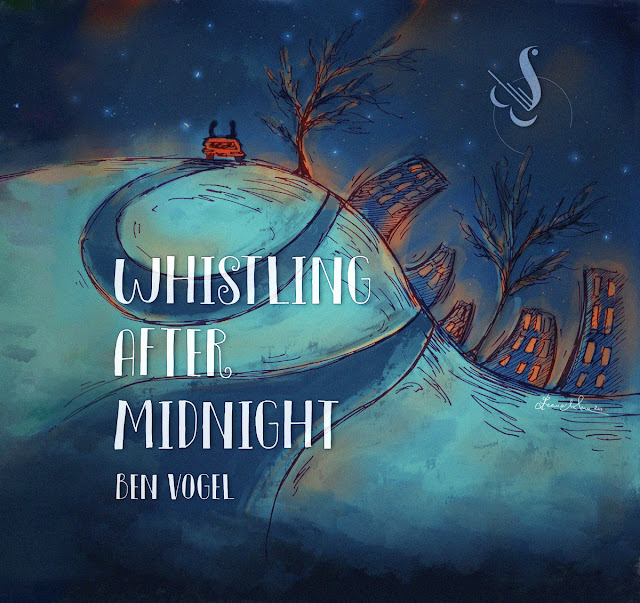 The musical year has been a really strange one for me. Partly due to reaching an age, when you realise the musicians that you admired as a youngster are not mortal, but more about seeing scenes that you love fall apart due to the opinionated. There seems to be a world of Me Me Me and all about Me at the moment.

Just when you are completely exasperated with Power Pop and Pop Rock, an album comes along that shows that there is still hope. Whistling After Midnight is Ben Vogel's debut album and yet it sounds little like such. It's a fine listen indeed.


Vogel has recently moved from Austin Texas to Chicago, but this album feels much more Sunshine State. He describes the album as 21st Century Power Pop, but the album leans far more on classic UK and U.S. Pop Rock, It's the type of well written, beautifully produced offering that you hear less and less these days.

There are big hints of 70's Singer Songwriter, but also UK New Wave and 80's Easy Listening Rock. That's not to say that this is derivative, because it isn't. As the years clock on, it's virtually impossible to find something that a song doesn't remind you of.


Cassidy is the stand out song, it's very Nick Heyward, but the other nine songs stand up just as well. Lazy Saturday is Jangling Power Pop that stands up with any of the current crop that you care to imagine. Leave This Town is a Soft Rock Ballad. Say That You Will is a happier Steely Dan.


Early Morning Hours is pure Squeeze, Wasting Time reminds me of Donnie Iris. I Hope You're Happy Happy Now could be a Sun Studios recording. Beautiful Sun closes the album with a big constantly changing sort of Show song, hints of Jazz and Funk abound, almost mid 70's Stevie Wonder. Whistling At Midnight caught me completely by surprise. It's an absolutely splendid listen.

You can listen to and buy the album here. You can find out more about Ben Vogel here.