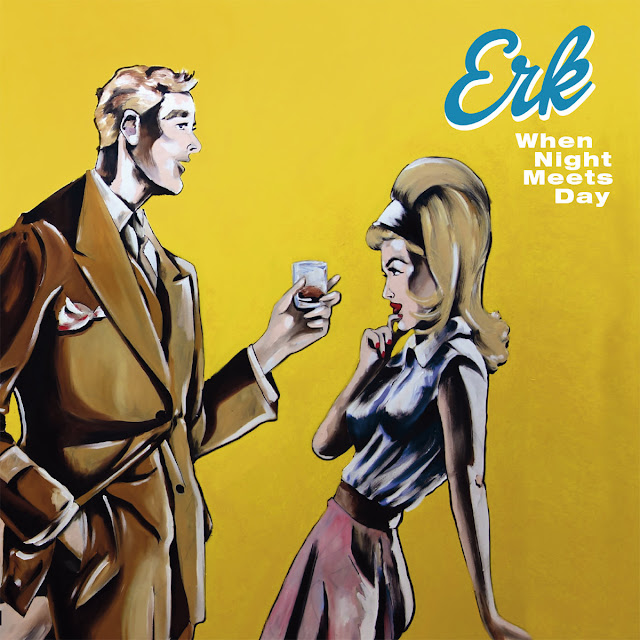 The first half of 2019 had less writing for me, but just as much listening. So with October being the second Review A Day month of the year, it's an ideal opportunity to catch up on things that I listened to, loved and didn't write about. One such example is Erk's album which was released in June.

This is Berlin's Erk Wiemer's third album and appears after a ten year gap. Wiemer stands up with those great piano playing singer songwriters of the 70's and although When Night Meets Day certainly offers up reminders of those great Pop Rock albums that graced the Seventies, there are indicators before and after that decade, in both style and content.

The arrangements are very up, but are equally Burt Bacharach and Brian Wilson as much as Gilbert O'Sullivan or John Howard. Indeed comparisons could be made to Ben Folds and there is definitely a Jellyfish vibe here and it's strong. There's a lot to compare to Roger Manning Jr.

There's something really showtime about the album, almost like a BBC Omnibus Special or ITV Variety Summer Showtime. The arrangements are great, the harmonies meticulous and the whole thing is just a joyful listen.


I Walk Like Charly Brown is Lounge Jazz, Living My Life Without You is 60's Revue big sounding Pop. Rhapsody Of You is a Skellern / O'Sullivan piano ballad that is beautifully arranged. Better Sad Than Dead has a Randy Newman beat that is almost Manilow. Hey Bro is Ska.

It's the jaunty Piano Pop that pleases these ears most, it gives off such a fantastic vibe. Chilly Winds Ahead and Malibu Beach's in Berlin are a great examples. Taking My Time is a poptastic duet with Diane Weigmann that works beautifully. When Night Meets Day is superb Piano Pop with a series of darts into other genres. It's a corking listen.

You can listen and buy the album here.

Posted by Anything Should Happen at 22:51

Email ThisBlogThis!Share to TwitterShare to FacebookShare to Pinterest
Labels: Erk