Albums That Have Been Gathering Dust : Rush - Power Windows 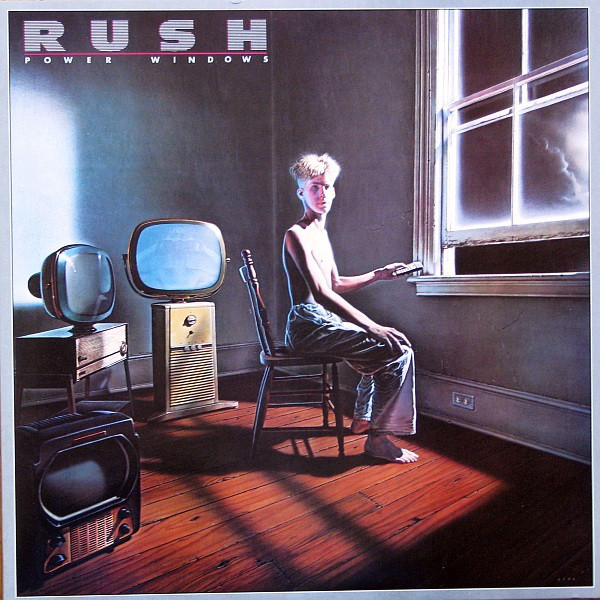 The biggest question that I used to get as a Rush fan was but how do you stand his voice? Then into the 80's, it was don't they do those side long Prog things? There was also those who accused the band of selling out from Permanent Waves onward. Well you get used to the voice, it's been rarely mentioned since the 90's, they were Prog, but haven't been since Hemispheres. It was also the complexity of that album, particularly playing it Live, that led to shorter less complex songs.

The structure of the songs wasn't any less enjoyable, indeed the side long affairs were made up of individual shorter parts. More of a problem in the 80's for some listeners, particularly those of a Rawk persuasion, was the embrace of technology which fought with the guitar. Permanent Waves and Moving Pictures were when Rush hit pay dirt, the songs would never be throwaway. Peart's lyrics wouldn't carry less meaning, it eventually became about those bloody synths.

Signals hinted at what was to come and Grace Under Pressure provided more evidence. Grace Under Pressure is a fantastic album, dated by that keyboard sound. Geddy Lee bought every synth in the shop and wanted to play them all. I had been asked to write a big piece on Rush in the 80's and the only album that I couldn't defend was Presto, it remains unloved, but it's still better than the mediocre Test For Echo. At least Presto was trying to do something different, Test For Echo was phoned in.


In between T4E and Presto were two albums that I used to play regularly, but hadn't for some time. Hold Your Fire was initially hard to get in the UK, but is a fantastic album, Rush at their most poptastic. I'd love to do a piece on that and may do for something like the next Big Stir Magazine. But 1985's Power Windows it is and it still sounds as great as it ever did. Yes there are still keyboards, but not quite as many and Alex Lifeson had finally decided that he wasn't Andy Summers.

The stand out song is Marathon with a Riff that hooks you, but that's a Bass Riff and one of the band's biggest ever choruses, although this was outdone by Mission on Hold Your Fire. The whole thing is so damn melodic and catchy. You still air drum to Peart, but the biggest plus is Lifeson's playing, oh how we missed you Alex and what about that solo on Marathon? Not forgetting Anne Dudley's String arrangement.

Power Windows isn't just about the arrangements, it's all about those choruses. Grand Designs and Manhattan Project are great examples, the latter's Jangling riff that leads up to the first line of the chorus, "A Big Bang Took And Shook The World".There's a slightly gentler approach to the old Side 2. There is an almost Chinese feel in Intros. Territories has a killer Peart Drum Beat on the chorus. Middletown Dreams is moodier and more straight ahead, but has another Big Chorus.

Emotion Detector, tinkles and jangles until a paint stripping Lifeson solo and yes there's a big chorus. Mystic Rhythms hits that Rhythm and it carries you home. Rush have usually opened up albums with simpler, more throwaway songs, a sort of Loosener. This time it's Big Money, next time it would be Force Ten.

So Power Windows may not be as talked about in Rush circles as it should be. It is probably the band's most commercial album, despite the lyrical depth. It is all about the choruses, but more importantly, it marked Alex's Lifeson's return to being the guitar extraordinaire that he is. You can pick the CD up for buttons, you really should. Over and Out!

Email ThisBlogThis!Share to TwitterShare to FacebookShare to Pinterest
Labels: Albums That Have Been Gathering Dust, Rush