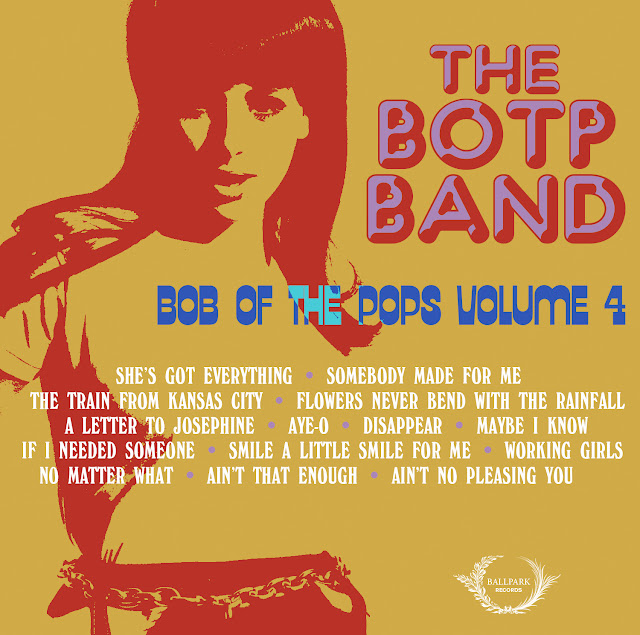 I absolutely love Robyn Gibson's Bob Of The Pops albums, he selects great songs to cover which are done incredibly well. I talked to Robyn last year about the project becoming a band at IPO Liverpool 2018. You can read that interview here.

The previous three volumes have solo affairs, now BOTP is a band and so Volume 4 becomes Gibson's first group album since The Junipers.  Versions of The Kinks' She's Got Everything and Teenage Fanclub's Ain't That Enough stand out.


He gets help from Divine Comedy's excellent Guitarist, Tosh Flood with wife, Lorraine Wilson on Emitt Rhodes's Somebody Made For Me. The equally excellent Duncan Maitland adds Harpsichord and Keyboards to the same song  and The Haystack's A Letter To Josephine. The latter continues the excellent choices of previous volumes.

Incredibly, there is even a mellow cover of Chas And Dave's Ain't No Pleasing You. I'm looking forward to Volume 5's Special Guests singing Snooker Loopy. Seriously though, the album is not just about the song selections, Gibson's voice is as splendid as ever.


There's another Carter / Lewis / Alquist cover to follow A Letter To Josephine on Aye-O, a real party hand clapping vibe. Smile A Little Smile For Mr is another inspired choice, Tony MacAulay and Geoff Stephen's song for The Flying Machine.

It's not all about the Sixties though. There are splendid versions of Madness's Disappear and Joe Pernice's Working Girls. All in all, this is a fantastic offering, appearing once more on the wonderful Futureman Records Label. It's a fine addition to the Bob Of The Pops collection, but also a great listen for first timers.

You can listen to and buy the album at Name Your Price here.

Email ThisBlogThis!Share to TwitterShare to FacebookShare to Pinterest
Labels: Bob Of The Pops, The Junipers