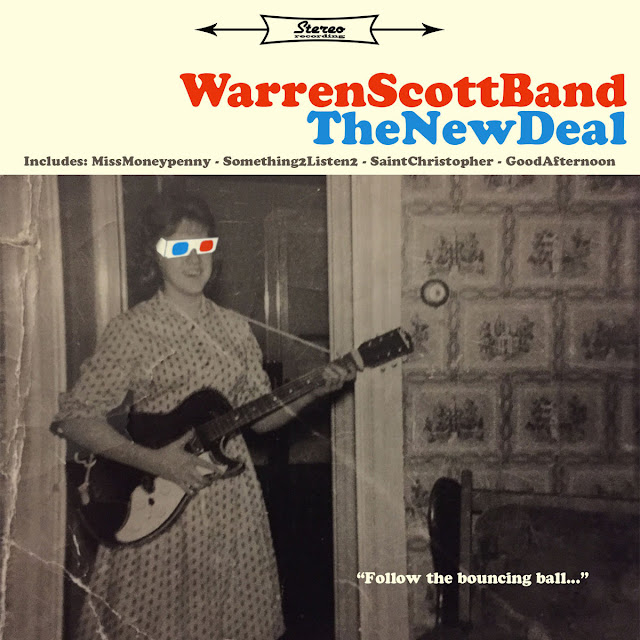 I was only recently thinking that New York had gone a bit quiet lately when up pops up the debut full length album from Brooklyn Trio, WarrenScottBand. The band have been together since 2004, releasing an EP in 2011, but it is this album that announces them properly to the world.

The New Deal isn't like your average Debut Album, these 10 songs are beautifully played, expertly recorded and fully formed. The sound is big and the material is incredibly varied. It is one of the big surprises of 2019 to me. This is such a fine listen.

So how would I describe the band? Well............they are a cross between The Wrecking Crew and a Chorus led R.E.M. There is a real lyrical depth that separates them from the Lost Love brigade and enhances the different musical directions.

WarrenScottBand cover all the bases expertly. For one song you can envisage then in a Sunset Boulevard Studio, the next Nashville. There are hints of Reggae and then a full blown Rock Out solo. One minute they are 60's Beat, the next 90's Indie. This is all achieved without ever loosing the album's seam. The songs are not all over the place, each feeling like a natural progression.


Good Afternoon is in Jayhawks Territory, Something2Listen2 could be Barenaked Ladies and She's A Little Bit Off is FM Top 40 material with it's massive chorus. St Christopher starts off so IRS and then morphs into a Ska chorus.

Spent is very Michael Stipe, yet the closing Nancy Lee is a tender 60's weepie. The title track will get a lot off attention, rightly so, it's a big quick changing introduction, but it's the whole album that deserves your concentration. Wonderfully written, The New Deal is a revelation. I can't recommend this album highly enough.

Email ThisBlogThis!Share to TwitterShare to FacebookShare to Pinterest
Labels: WarrenScottBand