Karma Gambit - When Does Rock And Roll Start To Get Sad 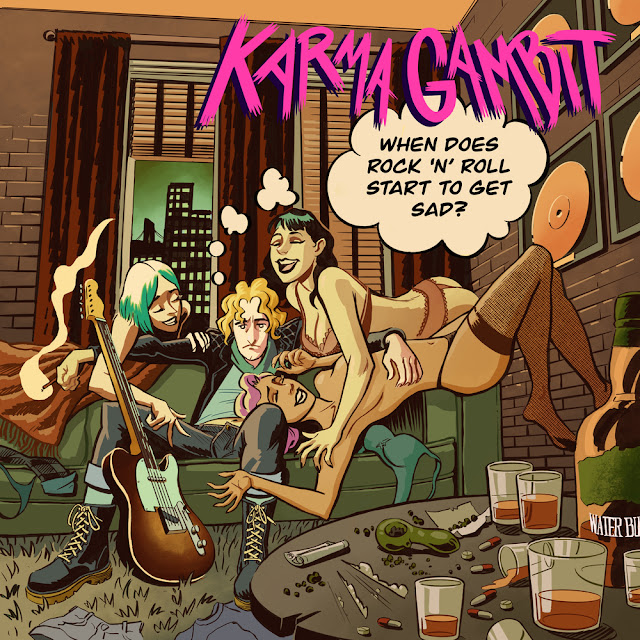 It is always great to see and hear young bands mastering Power Pop. The quartet from Asbury Park, New Jersey have managed that with an album that enhances the recent revival of the genre, but also looks back to the 70s in particular. Hopefully they can bring the younger audience to the party.

I am sure there will be many Fountains Of Wayne references from writers and DJs. That band have become a bit of a cliche for new Power Pop, as have Teenage Fanclub for Indie Guitar Pop. To me they sound much more like Farrah at times.

I say that because there is a real Pop Rock feel to the material at times. Karma Gambit are much more than a boy meets girl, I love you, yes I do. There is real intelligent and wit in the lyrics, which Power Pop cannot always claim.

Saying all that, Cable Knit Sweater is a very Stacy's Mom affair, lyrically great with a catch all earworm chorus. Last Night I Dreamed is a much different affair is a real 60s strum along, perfectly at home in a 60s TV Show, Monkees like. There are some splendid vocal harmonies in the chorus.

Adam Bomb is another great pop song with an unusual structure and a little Punk Pop. It is aided an ace fuzz solo and an hypnotic twee synth run throughout. I'm In Love With The Sun is built around a great riff and a Country feel.

Kiss And Tell is 60s heartbreak pop with a wonderful twang and Hello Minnesota could be Simon and Garfunkel and Folk like. Kick In The Teeth is pure Rock and Roll, the pace is much quicker and the solo is very Scotty Moore. There's even a Little Richard vibe on the verse.

Dorothy, Let's Go Home would fit well in a Broadway show with another set of fine lyrics. Aphrodite could be become a Power Pop fan fave and Straight To Voicemail runs it close. Matching heartbreak lyrics with a Busted like chorus and melodic Guitar solo.

When Does Rock And Roll Start To Get Sad is a really impressive album, The first four songs are excellent Power Pop and then the band seem to want to show you that they are no one trick pony. Top notch arrangements and vocal harmonies glow mightily.

This is mighty fine Pop Rock that deserves a wide audience. Hopefully the correct promotion and people giving it a chance by telling friends and potential fans about it will widen the scope. I have to say that it caught me completely by surprise. Highly Recommended.

You can listen to and buy the album here. You can also listen by following these links. The album is available on the Mint 400 Records label.

Posted by Anything Should Happen at 21:28