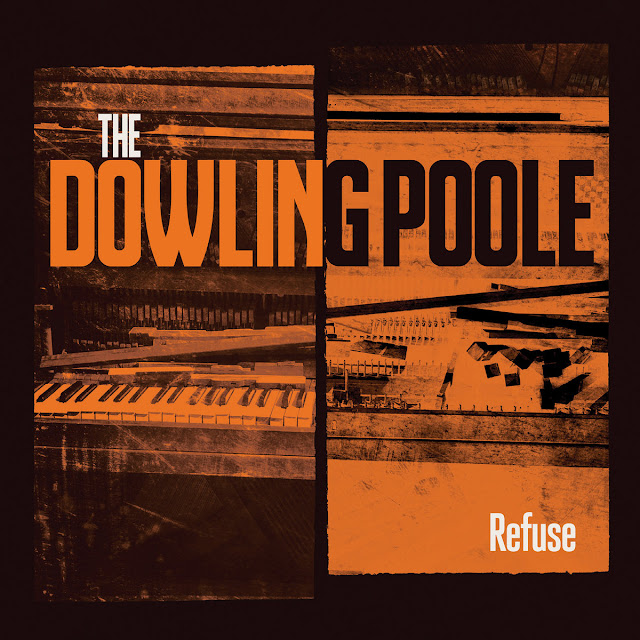 It seems like yesterday that The Dowling Poole released their debut album, Bleak Strategies. I was pretty gobsmacked to realise it was over 8 years ago. Since then, the duo have released some of the most inventive Pop of the past decade, genre crossing at will.

They have that attitude that many great intelligent Indie Artists have. They go wherever the music takes them, no two songs are the same, a blank canvas becomes an unexpected delight. The quality is no surprise, the pair have been involved in some of my favourite bands before uniting.

Willie Dowling was the driving force behind two magnificent bands, Honeycrack and Jackdaw4. Jon Poole was in Cardiacs from 1991, a wonderful period for the band. Both were also members of The Wildhearts. You see what I mean?

It can be hard knowing where to start with the band with the direction changes, song by song, This is particularly hard with Refuse's selections. This is a collection of the one off songs released as stand alones. Those nine songs are remixed and remastered. Then there is the bonus of two new songs.

Some of these songs were only available for limited periods, but this also an opportunity for the CD lover to not only get them all together in one place, but also on their beloved format. Refuse is also a fine album in its own right, showing the range and brilliance of the band.

Miles Checks Out is wonderful Psych Pop, very Toytown whilst Deep Breath edges heavily to Operatic Prog. White Light is Numan-esque, yet Bright Spark is a cross between XTC Drums And Wires period and their Dukes adventure.

Bricks From The Wall is great Modern Pop, but Fuck You Goodbye is Celtic. Push Repeat would be complete with backing by The Count Basie Orchestra and wouldn't be out of kilter on Spark's Indiscreet and still there's time for a poptastic chorus.

The Hand Moved is ace 70s Pop Rock, a little Prog, even a bit of a Torch Song and Optimum Delirium could be something from Yes's Drama album. The only problem that I have is knowing which three songs to embed in this review. Any of the 11 would suffice. What an album, what a duo!

You can listen to and buy the album here. You can find out more about The Dowling Poole here.

Posted by Anything Should Happen at 22:35

Email ThisBlogThis!Share to TwitterShare to FacebookShare to Pinterest
Labels: The Dowling Poole