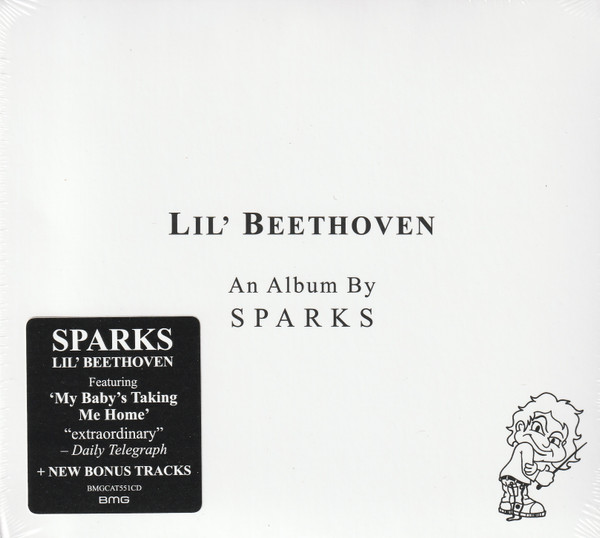 Time to return to Sparks and the 21st Century Collection Remasters as we reach the 20th Anniversary of Lil' Beethoven. My previous review of Balls didn't get as many adverse reactions as I expected. I think most fans know it is a clunker and the disappointing reaction led to a complete change of direction. The Mael Brothers felt that a change was needed and in the previous 30 years, they had never been afraid of that. In 2001, Sparks were approached to write a track for an album celebrating German Sports Broadcaster Gunther Koch. The resulting Wunderbar was Koch's ecstatic commentary phrases backed by a Sparks Orchestral arrangement.

Both the reaction and the process led the duo to follow that way and style of recording for their upcoming album having junked what was to be the follow up to Balls. I heard feedback in the lead up to the release and was a little concerned. This was to be an album of piano, synth orchestration and multi tracked vocals based on Repetition. I recalled a conversation with Mike Oldfield in which he declared that there was nothing wrong with repetition and as a Prog fan, I wasn't concerned about that.

What I was confused about was why one of the great lyricists of the past 30 years wasn't writing the wit laden songs that I was used to. But we'd been here before with the two Virgin albums and anything must be better than Balls. So I approached the album release with a little, but not overwhelming reticence. The first couple of listens had me gobsmacked. Repetition was definitely the key word. But it was hypnotic. The Rhythm Thief opened the album and the first spoken line was "I am the rhythm thief, say goodbye to the beat" although it became more au revoir in future years, there was definitely no Rhythm and no drums.

Instead, there was massive synth orchestrated songs that were more Classical in style and layer after layer after layer of vocals. No 1 In Heaven had been minimal, but that was driven by beat, here was something symphonic. Repeated listens revealed an absolute masterpiece. No one was doing something as elaborate and left field as this and calling it Pop. But it was Pop and those repeated lines across the majority of the songs became earworms. Not a chorus in sight.

The song titles revealed the usual humour. How Do I Get To Carnegie Hall?, What Are All These Bands So Angry About, I Married Myself, Your Call's Very Important To Us and Ugly Guys With Beautiful Girls et al. But lyrics were minimal, sometimes just one or two lines. The musical arrangements were fantastic and the vocal arrangements simply wonderful, but this was a very different Sparks and it was to be continued throughout the Noughties. They were to go full circle eventually with the FFS collaboration with Franz Ferdinand and then the two most recent albums which provided a lot of similarities to the Island Years.

The sheer impudence of Lil' Beethoven. Seven of the nine songs are stand alone orchestral masterpieces. The two exceptions being the wonderful Ugly Guys With Beautiful Girls adds Guitar and Drums and is a crazy 7 minutes of controlled noise with a spoken Russell Mael Vocal, lots of words and a nod to Dick Around on the next album. The closer is more traditional Sparks, if there is ever such a thing. Suburban Homeboy is wit and wisdom and sounds like something from a Yankee Doodle Doo show. There are five bonus tracks including the aforementioned Wunderbar from 2001 that kicked off this splendid album.

You can buy and listen to the album everywhere.

Posted by Anything Should Happen at 21:01

Email ThisBlogThis!Share to TwitterShare to FacebookShare to Pinterest
Labels: Sparks