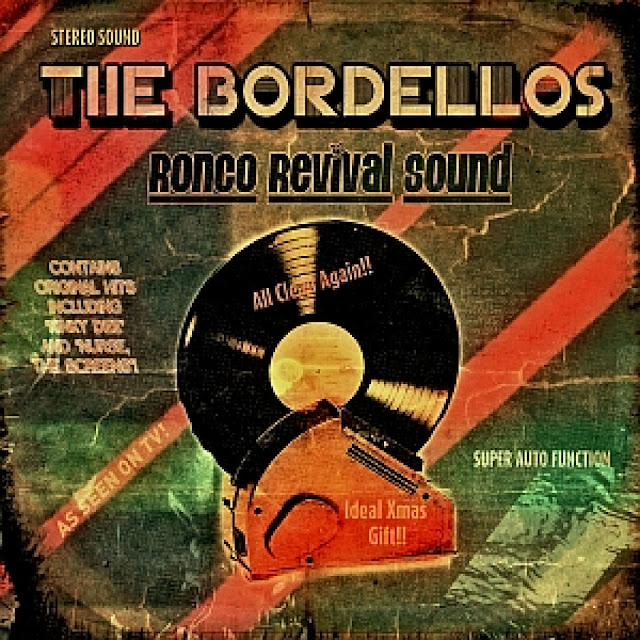 The 31 in 31 nears completion and the last few days have featured albums that are smack bang in the usual IDHAS territory. This has largely been because there has been a rush of excellent Pop Rock albums. However, I wanted October to also reflect, some of the non centric stuff that I listen to away from the reviews.

I absolutely adore The Bordellos. I suppose you could call them a family affair, but this is not Partridge like with a lets do the show right here vibe. The band are deliciously left field, an Indie joy that you have to listen to repeatedly to embrace their talent.

I've said many times that Brian Bordello is a Songwriter par excellence. He writes about the everyday mundane life in a small town and frowns on the constant nostalgia that inhabitants only ever want to talk about. People don't seem to go abroad for holidays because it's a bit far.

The lo-fi of recent years masks the strength of the lyrics that pour from his soul I've often yearned to see the band with a bigger studio budget and imagine the delights. So I'm chuffed that Metal Postcard have reissued Ronco Revival Sound. The 2013 album was from headier times and remains a superb offering.

In all this Indie goodness and songs that come from unusual angles there is still the incredible beauty of A Man You've Never Seen, a song that should get worldwide attention. Compare that to the organised cacophony and spite of Tattoo Heart.

The title track is maybe the closest thing that could be described Top 40, it is a splendid example of what you could describe as the intelligent 80s Indie Rock that so few mastered. Fruitcakes And Furry Collars is wonderful Electronic Psych.

Kinky Dee is ace 60s Garage Rock with an attitude vocal, Weird K vocally is well in the territory of Cast. Nurse. The Screens! is built on an hypnotic riff and there's Temperature Drop. This album closer is an absolute masterpiece. You can imagine someone like Marc Almond wringing the heart out of it. It is a melancholic, brooding delight and may be the best thing that the band have ever recorded.

The Bordellos are never gonna hit you on first listen, the material doesn't aim for or expect that. Unusual arrangements, the gold dust of the words and the sheer inventiveness betrays the lo-fi of it all. A superb album that deserves the music lover's attention. There is much more for the listener than big choruses.

Posted by Anything Should Happen at 18:22

Email ThisBlogThis!Share to TwitterShare to FacebookShare to Pinterest
Labels: The Bordellos