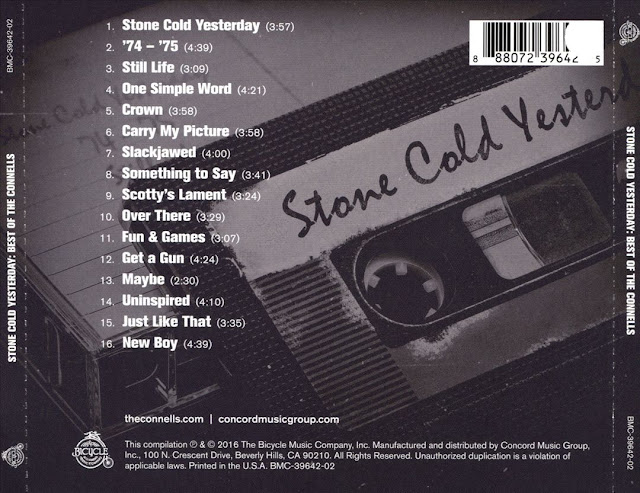 I suspect those in the know probably own most of the songs on this compilation and so it's largely for those who need directing. There;s enough here to please those who think the band was all about '74 - '75, that's the only song a lot of the European general public will know or remember.

It's also going to confuse people looking for the band's development that the track order isn't chronological, but that's a minor quibble as the track listing shows the band's variation. There's something from every album up to Still Life, with the exception of the debut album, Darker Days.


If you didn't know the band, these 16 songs would stand up as a testament to what a great band they are. They wrongly get labelled in the UK as Country Pop with the likes of The Jayhawks. Lest we forget, they were College Radio Favourites and their second album, Boylan Heights, produced by Mitch Easter, is a masterclass in Indie Jangle Pop. You get Scotty's Lament and Over There from that album.

Throughout the 12 years, that sweet voice of Doug MacMillan and the songwriting quality of Mike Connell shines through. Fun And Games is REM or even Morrissey like. Yet, Lay Me Down is so different, that riff is a killer.


Ring was the breakthrough album over here, so it's understandable that there are four songs. '74 - '75 is obviously here, but compare that to the rock out of Carry My Picture or Slackjawed, which has more in common with Brit Pop. Both are from the same album.


The band's 8 album career deserves further investigation by all and this is a great start for the beginner. Fans will argue about what isn't included as we always do, but as a stand alone offering, there's not much wrong here.  It shows their versatility and is a great listen start to finish.

The band have also been playing a few dates, so there's hope maybe of a tour extension and ideally, a new album.


What also gets forgotten is what a fantastic Live band they are. As good as anyone on their day, certainly one of the better gigs that I attended and attested by the FM Discs that circulate, I do hope they return. I suppose it makes sense to leave the final You Tube clip to show this and it might as well be '74 - '75.  This is a cracking compilation and it's to be hoped that it drags many new fans in.


Posted by Anything Should Happen at 15:02

Email ThisBlogThis!Share to TwitterShare to FacebookShare to Pinterest
Labels: The Connells