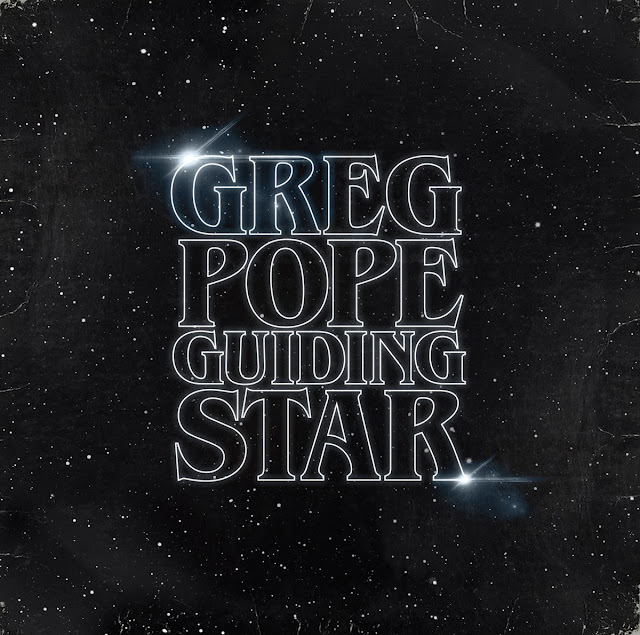 There is a theme developing in the last quarter of the year. Following on from Nick Piunti's superb Trust Your Instincts, Greg Pope follows up by releasing the best album of his career. We all know that he is a Power Pop God, but Guiding Star reaches out far further than anything that's gone before. The familiar hooks are there, but there is far more variation than you may expect, this is an absolute belter of an album.

Sun Is Gonna Rise is riff after riff to one of his most melodic songs ever, Pretend It's Alright is in classic 70's Singer Songwriter mode, far more laid back than you may expect with a great chorus, driven by a great bass line. I Think Not is Jangle Heaven and what about this for a song, the wonderfully lazy, Four Leave Clover? Great 70's style pop.

If You Want Answers is an acoustic stomper, almost Folk Rock with a Glam Guitar Hook. If You Want To Go varies again, with it's 60's pop heartbeat, a joy of a song. Flaming Arrows, begins with a whistle, yes a whistle and transcends into psych pop. Oppressive Invisible Something is so Beatles time McCartney.

I'd recommend any Greg Pope album, but the beauty of Guiding Star is the variety. Greg Pope could put out any Power Pop album and it'd be ace, but he's opened many boxes here. In doing this, he's shown that he doesn't deserve to be just lumped in with verse verse chorus verse solo chorus. It is one of the great pop albums of this year and any year. The album closer, Eggshells is glammy wonder and a fine end to a fantastic album. I know quite a few people like the subject matter.

As a side issue, there is a running joke on Facebook, where our aging Lurcher, Crash, displays albums to show what a Power Pop Expert he is. Only Nick Piunti and Greg Pope have been "blessed" in the photos so far. I suspect that this album and the vinyl release of Nick Piunti's Beyond The Static will be battling for his next masterpiece. He may settle on both.

You can and should buy this album here. I could have put any of the songs up here, but you can listen to them all before you buy. The CD is available for 10 dollars and that can be ordered here.


Posted by Anything Should Happen at 17:35