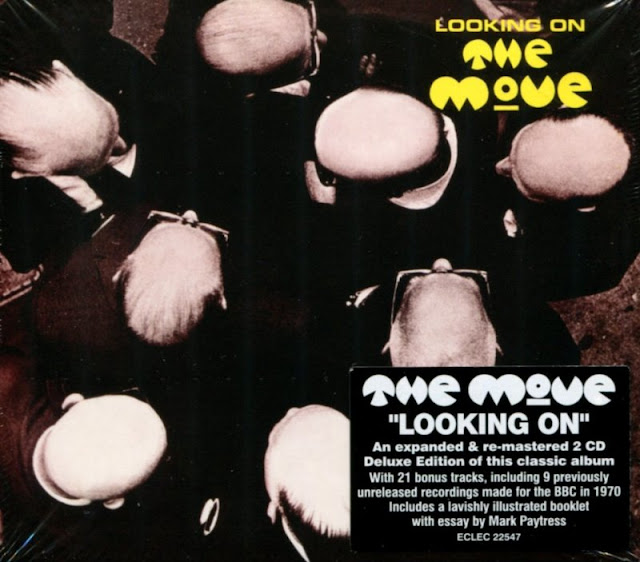 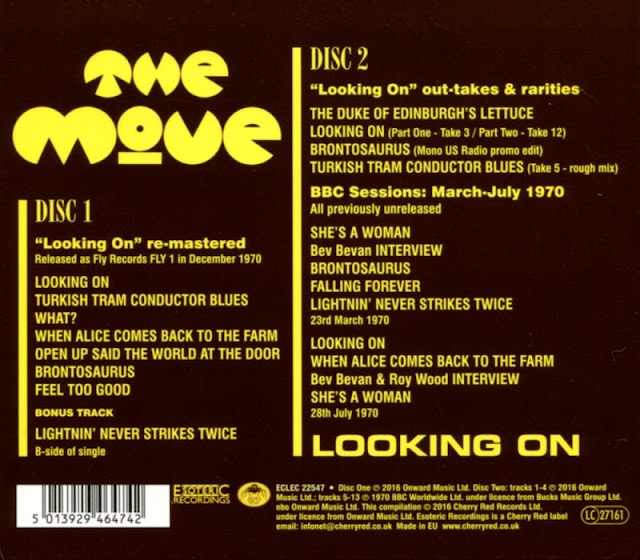 Cherry Red's Esoteric Imprint have reissued the first three Move albums plus the extended Something Else Marquee Live EP.

I've mentioned before that The Move started this musical obsession of mine and they remain dear to my heart. I play these albums regularly, still enthralled at how good they are and they also provide a Nostalgia Trip. I still remember excitedly buying that Move Compilation as an eleven year old, indeed the cover is framed on the wall.


I now have these first three albums four times, vinyl, original CD reissue, 2008 and now this. Not only that, but the complete albums are on The Movements Box Set and the songs probably make up a sixth copy across various compilations. The Move are released to death. There's also the Anthology Box Set which brought bits of all four albums together for the only time across four unreasonably short discs.

Esoteric have also released The Move and Shazam as single disc and Deluxe Editions. The Shazam split is a bit strange as it's only an extra pound for the two disc version. I'll cover all four releases in the ensuing days / weeks, but I start with Looking On. It's my favourite Move album, it's not the best, that's Shazam, but it means most to me and is The Move album I play most often.

Message In The Country isn't reissued, it was on Harvest. I have to admit though that has always been the runt of the litter for me. Half a great album. Three albums were being recorded at the same time and ELO 1 and Roy Wood's Boulders were far finer things.

The Move at this stage were down to Roy Wood and Bev Bevan as original members. Ace Kefford had been thrown out much earlier, Carl Wayne had left for cabaret and Trevor Burton didn't like the band's direction. In came Jeff Lynne from Idle Race and Rick Price on Bass. Incidentally, I've always felt Wood's songs always sounded better with Rick Price in the band, be that The Move or Wizzard.

The main difference on this 2016 release is the remaster. The sound is superb, a splendid effort. There are some strange omissions. Alternate Takes of Looking On and Feel Too Good that were on the 2008 Edition aren't here.

But what you finally get are the 1970 BBC Sessions. They've been available on bootleg for years in really ropey sound, these sound great here and are worth the admission alone. If only the same could be done with the Idle Race BBC Sessions.


The Move had completely distanced themselves from the pop glory of that debut album. It had started with Shazam, splendid though it was and ended with Looking On. The band had moved to the Fly Label and due to it's finances, promotion was minimal and the album sunk without a trace, speeding up the end of the band.

It was the ELO album that Wood and Lynne really wanted and The Message In The Country album was only recorded, so that they could release ELO 1.So concentrating on that original 7 Track album what do you get?

Feel Too Good is magnificent, my favourite Move song, it's Flower Power in a box. A joy from start to finish. Wood's other lengthy song is the title track. a heavy first half morphs into a sort of Jazz Rock that he would take up further, years later in the Wizzo Band.

Jeff Lynne wrote two songs, What, which hinted at what was to come with ELO and a gripping song with some great Bass playing from Price. The other was the psychedelic, Open Up Said The World, an extension of what Lynne had been doing in Idle Race.

Bev Bevan wrote a song, yes honestly and Turkish Tram Conductor Blues is surprisingly good. Wood in shouty mode and him and Jeff Lynne playing every guitar they could get their hands on.

This leaves the two remaining Wood songs. Brontosaurus was the final Regal Zonophone single (it's B Side Lightning Never Strikes Twice is also added). When Alice Comes Back To The Farm is simply wonderful. Here's a live version from Beat Club :


The BBC stuff is largely Looking On material, there are two covers of The Beatles' She's A Woman and at last an appearance of Falling Forever. The package itself shows that time has been spent on it. The original artwork is restored and there are splendid Liner Notes, done with admirable humour, by Mark Paytress.

This is the version of Looking On to have, if only I hadn't had to buy all the others. The lack of some of the alternate takes that were on the 2008 Edition is disappointing, but I suppose most Move fans will already have that release.

Hopefully this edition will bring new fans to the band. I love Music, I know how people credit my knowledge of Sparks, XTC and Power Pop. But the first band to ever move (sic) me were The Move. They still do and they are still my favourite band in the whole wide world.


Posted by Anything Should Happen at 12:44

Email ThisBlogThis!Share to TwitterShare to FacebookShare to Pinterest
Labels: The Move