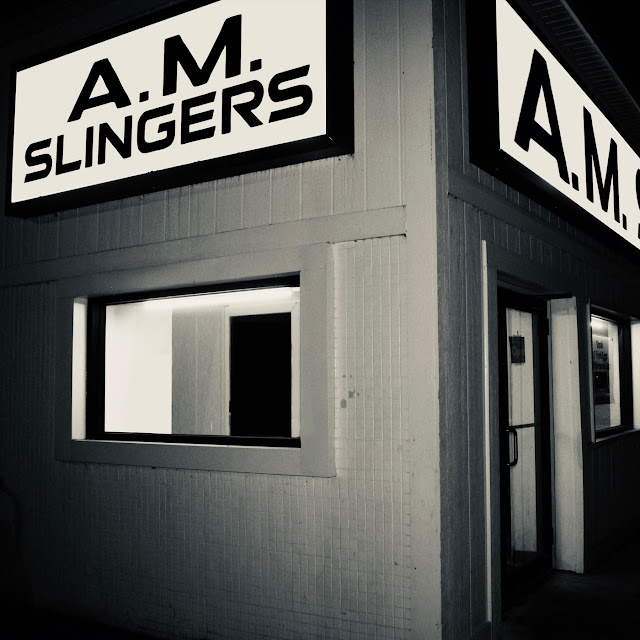 You only know what you know or learn. Which is part of the reason why I'm covering an album that was released 18 months ago, although it did get a vinyl release in January of this year. I try to dig out new stuff that isn't on the PR or Band Emails and I do ok with it. I was called an Influencer by someone a few months ago. A term that I hate.

I treat the word influencer with the same contempt that I do with the words dropped, banger and sophomore. But some of the best things come to me by recommendation from like minded souls and A.M. Slingers came to be via a track played on Gil's excellent Power Pop Shoppe. That's why I'm so late to the party.

So having done the pre-requisite of all reviews in talking about myself for as much as possible, I should now turn my attention to the Chicago quartet and their debut LP simply because it is really great. There is a sleazy Power Pop vibe to it all, New Wave even, but it is at times loose enough for Garage Rock.

What it is though is incredibly catchy and melodic despite its seemed intentions to be a far more earthy affair. The songs are really well constructed and really catch you by surprise. The songs are generally nearer 4 minutes than the usual 2 of this genre, but that isn't because they are unnecessarily extended.

Take for instance, the magnificent Bad Penny. A song built on a splendid, almost Buzzcocks, riff. It is no off the cuff thing, I am sure other reviews will mention The Replacements a lot, but there is far more here to enjoy than just noise.

Every time you think you've nailed the band, they surprise you. Pink Dress is almost Post Punk, but still has a killer New Wave riff. Rock N Roll Heart wants to be Desert Rock, but the vocal makes it far more Garage. Even a simpler song like Sinking Feeling has a magnetic charm to it.

At times, the odd song borders on the Hair Metal brigade, but without any of that genre's nonsense. Can't Fight is definitely venemous, but compare that to Second Guessing, which is very US 1983, a shouty dirty Power Pop gem.

Then there is the magnificent sprawling No Way Out to close the album. It is meandering towards a much darker place, out of time with the rest of the album. Approaching 6 minutes, it is hypnotic. Cry Cry is even built around a Goth like riff.

It is those riffs that make this album. No matter what direction it takes, the riffs grip you and place the album into far more commercial territory. I may be 18 months too late, but there's a lifetime left for you to enjoy this debut. Absolutely Top Notch!

Posted by Anything Should Happen at 17:08