Greg Antista And The Lonely Streets - Under The Neon Heat 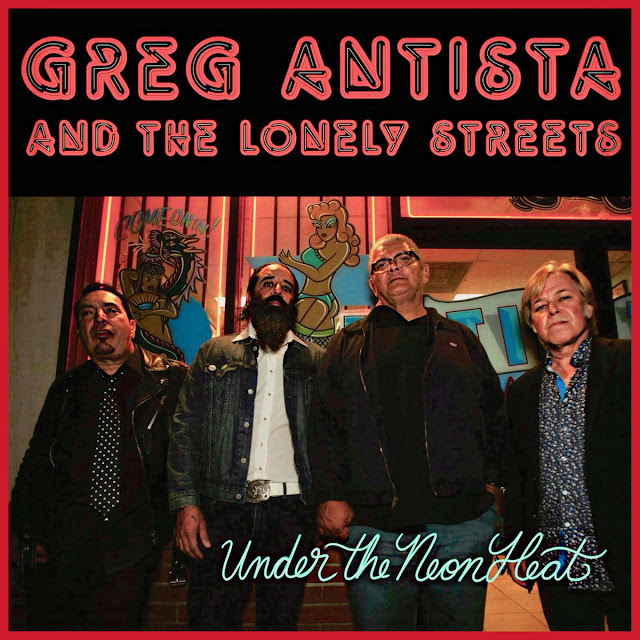 As well as catching up, the 31 Reviews in 31 Days is a way of showing that I Don't Hear A Single has a wider remit than people think and there are a couple of things yet to come that you wouldn't expect to see on here.

But as a pause, I've gone for something that people would expect to appear. Greg Antista And The Lonely Streets on great feel good three minute pop songs that maybe you'd expect to hear on the East Coast rather than West Coast Of America.

A quartet of veterans who know what they are doing and want to show you wat it's all about, this is great Pop Rock done at pace with just a hint of Americana. It is wonderful heads down stuff with big choruses and hooks aplenty.

The band's second album just never lets up. I defy anyone not to shake their fist and sing along to Tijuana Jail. Together Tonight is riff driven with an energy that seems to be lacking in younger bands. Lonesome Casualty has a splendid Jangle and Half Way To Whole gets all Punk.

There's even a surprise closer with Warren Does Warren (Carmelita) which goes all yee haw Country, unexpected but delightful. Under The Neon Heart rarely comes up for air, the riffs just grab hold of you. The Stand out is probably Rosalita (no not that one) with its wonderful twang.

The 38 minutes here won't change your life, but will make it feel a whole lot better. The band remind me a lot of The Amplifier Heads, but the songs have a much bigger sound. A Joyful feel great album awaits you. Highly Recommended!

Posted by Anything Should Happen at 18:20

Email ThisBlogThis!Share to TwitterShare to FacebookShare to Pinterest
Labels: Greg Antista And The Lonely Streets