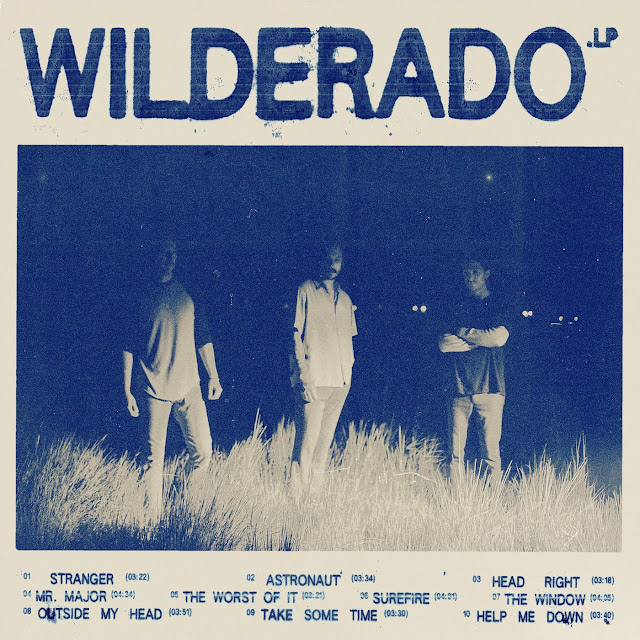 Tulsa Trio Wilderado have had fans waiting for quite a while for this debut album. It has been three years since the last of their three EPs, Favors and although there have been singles to keep the interest high, lockdown etc has held back the much anticipated full length release.

That time has been well spent, honing the self titled album and it reveals itself to be even better than imagined. Sometimes the band come the nearest we probably will ever come to Modern Pop on I Don't Hear A Single. But that isn't anywhere near an explanation of what they do.

It is Max Rainer's vocal that allows the most variety, his voice is at one with the Top 40, yet equally adept at great Pop Rock and even Americana. That allows the band to stretch themselves away from one particular direction.

Outside My Head leans toward Country and Take Some Time could be West Coast Easy Listening. Help Me Down even sounds like Campfire Americana. Don't let this fool you though because there are equally excellent Pop Rock moments.

Mr Major has a real "follow me" vibe with its hypnotic riff and break out chorus. The Worst Of It has another killer chorus and hints of The Killers in the instrumentation. The real stand out though is the wonderful, Astronaut, a low key verse leads into a big catchy chorus.

Underneath these 10 songs, there is a hint of melancholy, a story of ups and downs. You get the feeling that Wilderado could really rock out, but why should they when they can write and perform songs as good as this. A Trio who know what they are doing and the sum of its parts. This is great!

You can listen to and buy the album here. The album is available on CD, Vinyl or as a download.

Posted by Anything Should Happen at 23:24

Email ThisBlogThis!Share to TwitterShare to FacebookShare to Pinterest
Labels: Wilderado