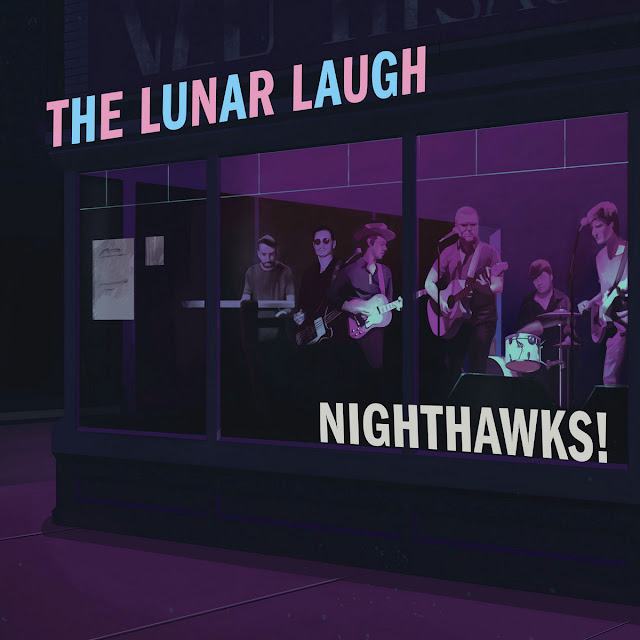 With I Don't Hear A Single's remit being about the new and under appreciated, there's a lot to cover. So it isn't too often that a band get to their third review on here. Not because of talent, but because there are so many deserving causes. However, Oklahoma's The Lunar Laugh are one such band.

You can read the IDHAS review of their second album, Mama's Boy here and their previous third album, Goodnight Noises Everywhere here. Now on the all conquering Big Stir label, album number four showcases their talent on a live album with performances from across their career thus far. But it isn't only that as there are two new songs to open proceedings.

Covering these two songs first, I Wanna Know is a fine return. Everything that you need in a Pop Song is contained within, melody, killer chorus and twanging Guitar solo. It's OK has a slight Country Rock feel without losing any of its pop sensibilities. The chorus is a great example of the band's Pop bent.

I mentioned in the last review that there seemed a much bigger band element. The three piece of Jared Lesiktas, Connor Anderson and Campbell Young have certainly broadened their sound. There are quite a few great Pop Rock bands, but few, if any are as good live. A lot of the genre is built in studios that makes it hard to replicate in an audience setting.

So Big Stir get an instant Best Of (So Far) to cover The Covid Years and The Lunar Laugh are able to demonstrate their live prowess. The selection is taken from a set in 2017, two in 2018 and one in 2019. With two being in 2018, the selections are mainly from the Mama's Boy Tour, but the dates mean the whole song history is witnessed.

By The Light Of The Living Room may still be their best song, but the Glam Rock of Living A Lie comes a close second. Elsewhere, the moody Soft Rock of Waiting For A Sign and the sheer joy of Mama's Boy are essential listens. Welcome To The World sounds as great as ever with its Pilot like Riff and the Country cover of Neil Diamond's Solitary Man is outstanding.

This is no thrown together album. The sound is superb and playing Live demonstrates the melody and catchiness of the band's output. But for recent events, this would have been a studio fourth album, so what will be their fifth album can't come soon enough. I Can't Wait!

You can buy and listen to the album at the Bandcamp sites of the band here or on Big Stir here. You can also purchase the album from the Big Stir Website here. You can find out more about The Lunar Laugh here.

Posted by Anything Should Happen at 21:51

Email ThisBlogThis!Share to TwitterShare to FacebookShare to Pinterest
Labels: The Lunar Laugh