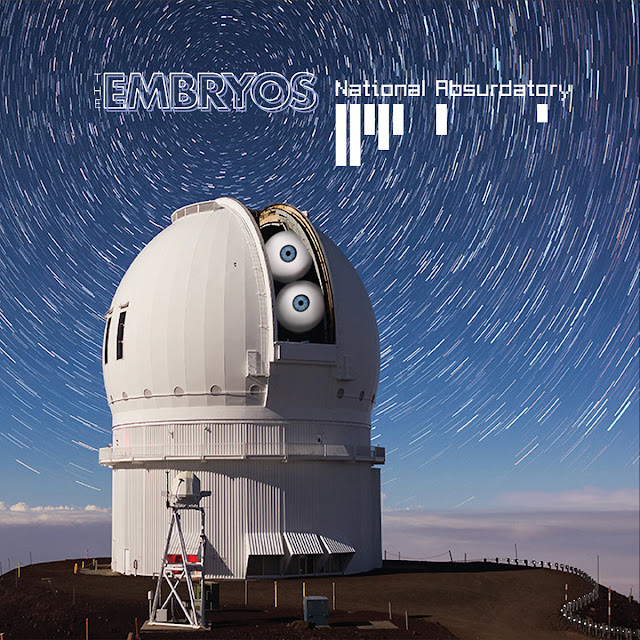 I'd slightly lost touch with The Embryos after three excellent Singles Club Releases. So I realised the error of my ways with the release of National Absurdatory, the splendid new album from the Chicago quartet. It is an absolute joy to listen to.

There's a welcome variety to their material in the type of songs they offer up, but this is enhanced due to all four of them taking on Lead Vocals at different stages. The band walk easily through Easy Listening to Psych Pop with all in between. They initially give the impression of a laid back affair which completely fools you.

Review wise, I have a habit of saving the best till last song wise. Well lets reverse that this time. Rattlesnakes was released as a single in April this year and it is a great song, gentle Psych Pop at its very best. Well that was an edit and here you have the full 7 minutes 14 of it. The second half of it is an instrumental wonderland. You just don't want it to end. It is worth the admission alone.

However, National Absurdatory doesn't end there, to be honest it is just the starting gun. Morning Birds is almost Philly in its feel, yet  Spend Tonight is more Rock n Roll. You Can Be A Mystery has a West Coast Jangle that could be Teenage Fanclub in relaxed mode and what a great Bass line.

Catching Fire is great 70s Pop Rock whilst Cosmic Wheel is easy listening joy. Someone To Hold me is heartbreakingly beautiful with its accompanying Country twang. The Funky Embryo is even a short funk instrumental jam which catches you by surprise.

All killer no filler here. The Embryos take you completely by surprise. There's a real laidback quality to what they do and then they just leave you floored with something unexpected. A magnificently arranged and played album awaits those who delve into it. Everyone should.

Posted by Anything Should Happen at 15:13

Email ThisBlogThis!Share to TwitterShare to FacebookShare to Pinterest
Labels: The Embryos